The Graham Center to get a new home

YORK, Pa. — Don Graham, York business leader, philanthropist, and longtime supporter of Penn State York, has made a major gift to advance entrepreneurship and economic development at the campus and in the community. Graham’s gift will provide a dedicated building on campus for The Graham Center for Entrepreneurial Leadership Studies (The Graham Center), which his support helped to found in 2013.

“Penn State is committed to driving economic prosperity across the Commonwealth by advancing entrepreneurship, innovation, and discovery,” said Penn State President Eric J. Barron. “This is the driving focus of Invent Penn State, and this is a central theme of our campaign, A Greater Penn State for 21st Century Excellence. Penn State York and the communities it serves are fortunate that Don Graham has chosen to support these efforts with such a generous and visionary gift.”

Graham’s gift will fund the construction of a new home for The Graham Center for Entrepreneurial Leadership Studies. The mission of the center is to advance entrepreneurial education and build partnerships among students, faculty and corporate leaders.

"It’s been rewarding to see students develop the entrepreneurial skills needed in the community and the American business sector."

The new building, which will span over 5,000 square feet, will feature an open-concept floor plan to facilitate collaboration, a meeting space for groups of up to 100, and on-site offices for center staff. The center will be located prominently on campus to provide visibility to the center’s activities and convenient access for corporate partners.

“By enhancing The Graham Center, Don Graham’s gift will enable enterprising students and community members in York to turn their business ideas into reality, transforming their own livelihoods and enriching our community,” said Penn State York Chancellor David W. Chown. “I hope that others who care about the economic vitality of York will join Don in supporting these exciting efforts.”

This gift will also add funds to The Endowment for The Graham Center for Entrepreneurial Leadership which was formed in 2013 and will qualify for a 1:1 University match through the Economic Development Incentive Matching Program, a featured giving opportunity of A Greater Penn State for 21st Century Excellence.  This endowment is to support and enhance programs at the center.

“It’s been rewarding to see students develop the entrepreneurial skills needed in the community and the American business sector,” said Graham. “I’m delighted to help the Graham Center create such opportunities for creative and ambitious Penn State York students and community members. I hope that Penn State supporters, local employers and others who believe in the power of entrepreneurism will join me in supporting these efforts,” said Graham.

Graham holds undergraduate and graduate degrees from the University of Michigan, as well as an Honorary Doctorate Degree. He is the chairman and founder of The Graham Group, a York- and Philadelphia-based organization which is comprised of several global manufacturing businesses and four independent private equity firms. He founded the company at age 27 in the basement of a rented farmhouse in Dover, Pennsylvania, with no capital and one employee. At age 84 he remains actively involved with The Graham Group.

Gifts from Penn State’s alumni and friends have been essential to the success of the University’s historic land-grant mission to serve the public good. To fulfill that mission for a new era of rapid change and global connections, the University has begun A Greater Penn State for 21st Century Excellence, a fast-paced campaign focused on the three key imperatives of a public university. Private support will keep the door to higher education open and enable students to graduate on time and on track to success; create transformative experiences on Penn State campuses and around the globe that tap the full potential of Penn Staters to make a difference; and impact the world through discovery, innovation, and entrepreneurship. To learn more, visit greaterpennstate.psu.edu.

To join Graham in making a gift to The Graham Center, contact Di Hershey, director of development for Penn State York, at 717-771-4127 or [email protected]. Visit the website to learn more about The Graham Center. 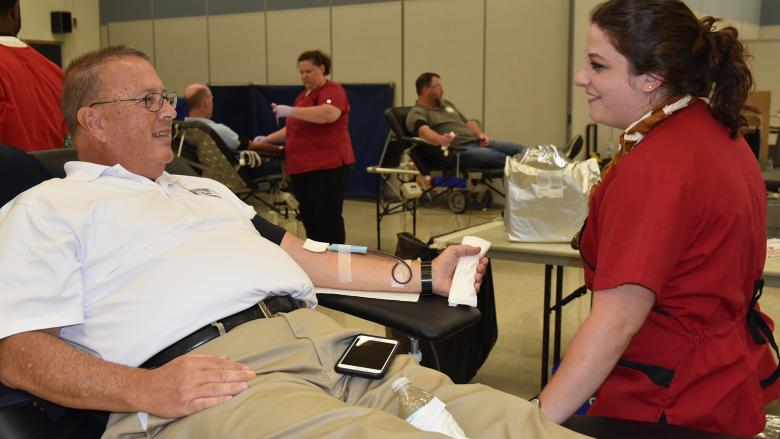 Give the gift of life at Penn State York community blood drive Aug. 29