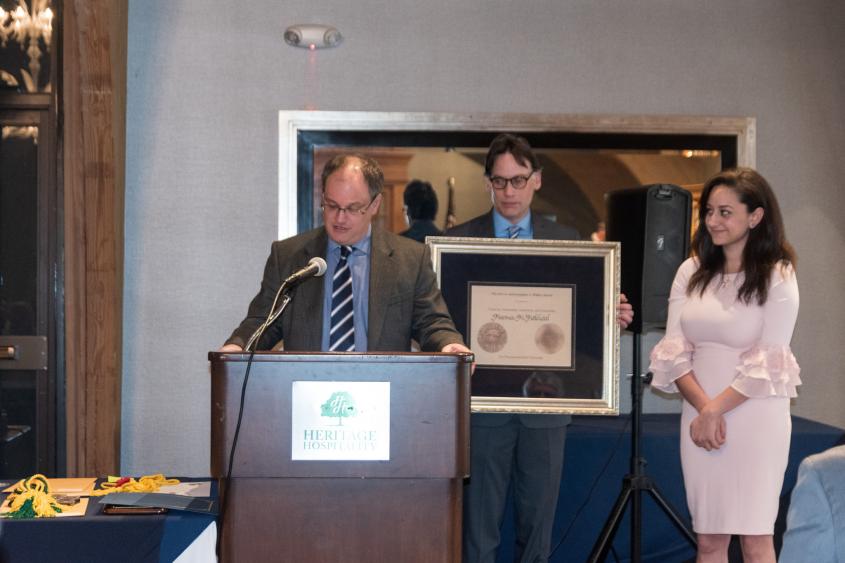 Marina M. Mekheal, a student at Penn State York, right, received the Eric A. and Josephine S. Walker Award, the highest award a student can receive at a campus, during the 2018 Academic Awards Program on Sunday, April 22.  Andy Landis, associate professor of chemistry, left, nominated Mekheal for the award.  Scott Simonds, director of student affairs at Penn State York, center, held the Walker Award plaque while Landis talked about Mekheal and her accomplishments.

Highlights of the program were the presentation of the Eric A. and Josephine S. Walker Award, the James H. Burness Award for Excellence in Teaching, the Penn State York Advising Award, and the Clark E. Fisher Memorial Award.

View photos from the event here.

The Eric A. and Josephine S. Walker Award, the most prestigious student award of the evening, was presented to Marina M. Mekheal. This award is given annually to a full-time student who exhibits outstanding qualities of character, scholarship, leadership, and citizenship. Each Penn State campus selects a recipient of this award. Mekheal is a junior at Penn State York majoring in genetics and developmental biology. She is from York, Pennsylvania. Mekheal was recognized for her outstanding academic ability, undergraduate research efforts, and involvement in a variety of organizations on campus. She also devoted more than 100 hours of tutoring services to the Nittany Success Center in an effort to help fellow students, and is part of The Graham Center for Entrepreneurial Leadership Studies (The Graham Center) program on campus.

The Clark E. Fisher Memorial Award honors and recognizes outstanding achievement in engineering by a full-time undergraduate student. The award is named for the late Clark E. Fisher, 1983 Penn State engineering graduate. Fisher’s family members, Precision Custom Components (PCC) - Fisher’s former employer, colleagues from PCC, and friends joined together last year to create an award in remembrance of Fisher. The award is given in the field that Fisher loved, engineering. Scott M. Murry, Wrightsville, Pennsylvania, is the recipient.

The James H. Burness Award for Excellence in Teaching is given to one part-time and one full-time member of the Penn State York faculty based on nominations by students and other members of the campus community.  The award is named in honor of the late James H. Burness, in recognition of his outstanding teaching and service to the campus.  Burness died in December 1999. This year's recipients are Jessica, assistant professor of biology, full-time award and James Miller, adjunct lecturer in mathematics, part-time award.

Petko, of Hummelstown, Pennsylvania, earned high praise from students who said her love for biology rubs off on others.  Another student noted, “No teacher is perfect but she is darn close.”  Others touted her enthusiasm and helpfulness in and out of class, while others called Petko the best teacher ever!

Miller, of Mount Wolf, Pennsylvania, also earned high praise from his students.  One student wrote, “I have attended several years of college elsewhere where I obtained various degrees. During that time, I have had countless math professors. I will say that Professor Miller is, hands down, the best math prof I have ever had.” Others pointed out Miller’s ability to explain subject matter in a way that everyone can understand and absorb.  Another student noted, “Professor Miller is very patient with his class and is willing to put in extra time after class to help students out.”

The Faculty Scholarship of Research and Creative Accomplishments award recognizes outstanding achievements in research and/or creative accomplishments within the prior three years in the context of sustained record of scholarship. Jorge Santiago-Blay, adjunct lecturer in biology, is the 2017-18 recipient.

Santiago-Blay has developed an extensive publication record during the past three years. It is not only high quality—including more than a dozen co-authored articles in refereed venues—but also varied, stretching beyond biology into the fields of chemistry and pedagogy. Dr. Santiago-Blay regularly conducts field research, while frequently involving students in his work at the National Museum of Natural History. In addition, he serves as editor-in-chief for a journal, *Life: The Excitement of Biology*, and he recently edited a peer-reviewed, international book series: “Research on Chrysomelidae” (2015, 2016).  Santiago-Blay also received accolades in one nomination for his display of "energy, curiosity, enthusiasm, and tenacity in carrying out collaborative research, with outstanding results."

The feedback from Smeltzer’s student advisees spoke highly of her role as not just an adviser for academics, but a strong mentor and role model for students. The nominations spoke of Smeltzer’s efforts fi make every student see their true potential, and that she routinely goes out of the way to help students who have transitioned beyond York campus feel comfortable and well-prepared for their time at University Park. Smeltzer’s impact on students is clear from yet another student’s comment, “From my very first days, Mrs. Smeltzer was nothing but helpful.  I appreciated that she always made sure to check in throughout the semester and see how I was doing (which is nice as a terrified freshman!), and always provided positive feedback as to how I was doing academically.”

The Freshman Chemistry Award is presented to a freshman based on outstanding academic achievement in chemistry.  Taylor Forrester, York, Pennsylvania, is this year’s recipient.

The Dr. Harriet Darling Award – Human Development and Family Studies (HD FS) is presented to an outstanding student who shows commitment to learning and critical thinking, is compassionate, understands issues and opportunities in the lives of children and families, contributes to and advocates for the well-being of others on campus or in the community, and has shown the most improvement through personal growth.  Briana Dowling, York, Pennsylvania, is the award recipient.

The Professor Orsay Kucukemiroglu Business Award is presented to a graduating senior majoring in business, and has the highest GPA. Jason H. Graves, Marietta, Pennsylvania, is the award recipient.

The Outstanding Student-Veteran Award is given to a student demonstrating academic achievement, strength of character, and commitment to service. The award recognizes an extraordinary student who has overcome challenges in reaching this academic milestone, has been involved on campus or in the local community, and has helped make a positive difference for students. Patrick Leeper, Mount Joy, Pennsylvania, is the award recipient.

The Student Government Association (SGA) Campus Service Award is given annually to students whose services have benefited the campus.  The award recipient is chosen by the student body. Zachariah Abbas, York, Pennsylvania, was the winner.

The Student Appreciation Award is given to faculty or staff person for outstanding service to students.  The recipient was Robert Lehman, York, Pennsylvania, Lieutenant, University Police and Public Safety Department.

Gary L. Collison Community Service Awards were presented to Tyler Vanwyk, York, Pennsylvania and Megan Knisely, York, Pennsylvania. The service awards are named to honor the late Gary L. Collison, professor of English and American Studies at Penn State York, whose idea it was to recognize students for their volunteer service. In addition to community service, recipients must have a minimum of a 2.5 GPA.

The Unsung Hero Award is a new award on campus and recognizes a Penn State York faculty or staff member for unselfishly providing outstanding service to the campus and its students, often with limited recognition. Selection is made through student, faculty, and staff nominations.  Cathy Sheaffer, York, Pennsylvania, staff assistant in the advising and career development office, is the recipient.

The Campus Diversity Award is presented to the student who best reflects the values of diversity and intercultural understanding expressed in the campus statement on diversity. The recipient will have participated in and promoted multicultural activities on the campus and within the University as well as in the community at large.  Francyou Desse, York, Pennsylvania, is the award recipient.

The Rotary Club Award is presented to a student who has completed a minimum of three semesters with a 3.0 GPA, and has made significant service contributions to the campus and/or community while a student at Penn state York.  Pamela A. Fulginiti, Hanover, Pennsylvania, is the recipient.

The Academic Achievement Award is given to a student or students in recognition of distinctive academic accomplishments.  The award is intended to recognize students who may not have won an award based solely on overall GOA but who may have done a special project or otherwise done outstanding academic work in a particular area. Minimum qualifications include second year standing by the spring semester of the year in which the award is presented, and a 3.50 or higher cumulative GPA.  Marina M. Mekheal, York, Pennsylvania, is the recipient.

The Academic Achievement in the Biological Sciences Award is presented to a student earning a bachelor of science in Biology or Science and completing their degree at Penn state York. This student is in their final two years of study and has demonstrated excellence in course work, independent studies, and/or extracurricular activities related to their field. The award recipient is chosen by the biology faculty. Trevor Trachina, York, Pennsylvania, is the recipient.

Penn State Alumni Association (PSAA) York County Chapter Award is presented to any Penn State York student who possesses outstanding qualities of scholarship, leadership, and service to the campus.  Students must have a minimum 3.0 GPA and participate actively in the Blue & White Society and/or Lion Ambassadors.  Kristina Searfoss, Fawn Grove, Pennsylvania, is the recipient.

The Tutor of the Year Award is presented to the tutor who has made the greatest impact on students who came to the Nittany Success Center for extra help with their course work. Marthura Thileepan, York, Pennsylvania, is the award recipient.

The Lambda Pi Eta Award is the honor society of the National Communication Association that recognizes, fosters, and rewards outstanding scholastic achievement while stimulating interest in the communication discipline. All persons considered for membership must exhibit high standards of personal and professional character and support the purposes of the honor society.  Recipients of this award are Hannah Bartkowski, York, Pennsylvania; Magdalen Matthews, Red Lion, Pennsylvania; and Patrick McClane, Mount Wolf, Pennsylvania.

The Edward M. Elias Award is presented to the first- and second-year baccalaureate students moving to a campus within the Penn State system with the highest GPA.  Thomas Moyer, Red Lion, Pennsylvania and Colin M. Miller, York, Pennsylvania, are the recipients. 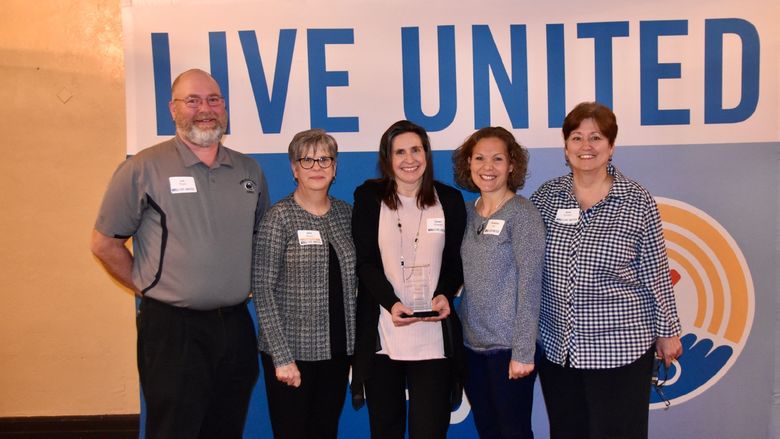 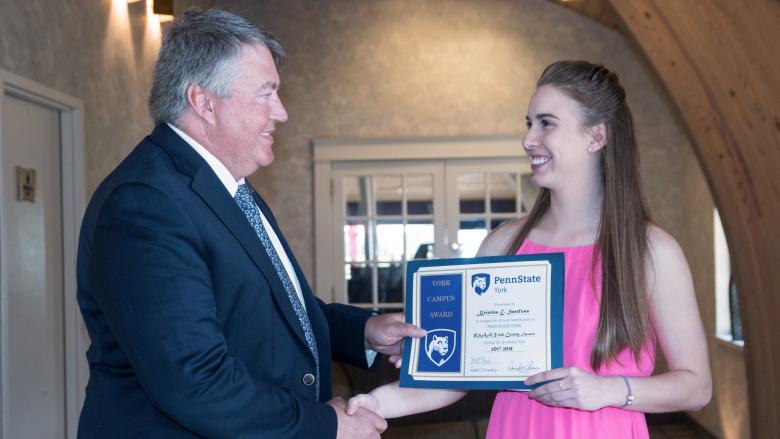 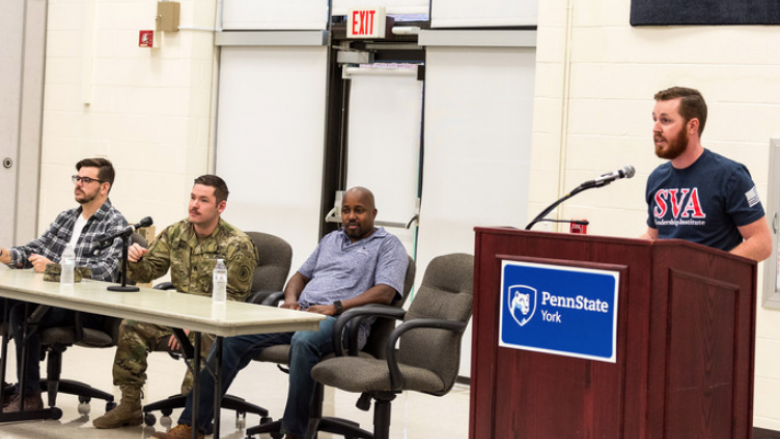 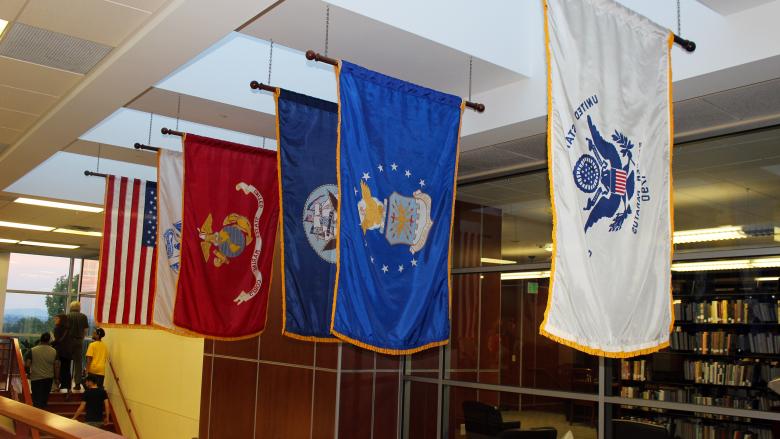