Penn State York honored men's and women's basketball players who are seniors during Senior Night on Feb. 6.  Christian Buser, Emily Colon, Kayla Miller, and Karra Thomason, left to right, are set to graduate in May.

Penn State York’s men’s and women’s basketball teams closed out their seasons with trips to the playoffs. The women’s team made the playoffs for the first time in four years but were knocked out by Penn State Schuylkill, 69-44. The Lady Lions improved their conference record to 9-5 from 4-10 just a year ago. The Penn State York men’s team made it to the semifinals but lost to Penn State Brandywine, 80-68. Their conference record was 12-4.

Richard Grant was named First Team All-Conference for his play in the 2017-18 basketball season. The 6'6" junior from York, Pennsylvania, (Susquehannock High School) shot 52.5 percent from the field this season, averaging 18.0 points, 9.0 rebounds, and 1.2 blocks in 29 minutes per game, all career-highs.

Grant scored a season-high 31 points on 13–21 shooting in an 80–70 win over Penn State Worthington Scranton on Feb. 2. Grant was also 5–6 from the line in the win and pulled down 14 rebounds. Following that game, Grant was also named PSUAC Player of the Week.  He is majoring in human development and family studies at the York campus.

PSUAC Co-Defensive Player of the Year

Justin Luton was named Co-Defensive Player of the Year for his play during the 2017-18 men’s basketball season  Luton shares the award with Jonathan Buie of Penn State Lehigh Valley.

Luton scored a season-high 18 points on 8–11 shooting in a 77–62 win at Penn State Worthington Scranton on Nov. 28. His season-high five blocks on Jan. 23 helped Penn State York to an 89–88 overtime win against Penn State Lehigh Valley, with two of those five blocks coming in the extra period. He is majoring in information sciences and technology at York.

Emily Colon was named Second Team All-Conference for her play in the 2017-18 women’s basketball season.

The 5'6" senior from Lancaster, Pennsylvania, (Lancaster Catholic High School) averaged 15.1 points, 7.3 rebounds, 2.6 assists, and 1.4 steals per game before tearing her ACL with two weeks left to play in the season. Colon twice scored 30 points in a game this season, on Nov. 11 vs. Mid-Atlantic Christian and again Jan. 12 against Penn State Mont Alto, when she shot 12–21 from the field and 5–7 from the line. In January, following the Mont Alto game, Colon was named the PSUAC Player of the Week.

Corina Rivera was named an All-Conference Honorable Mention for her play in the 2017-18 women’s basketball season.

The freshman from Lancaster, Pennsylvania, (Lancaster Catholic High School) averaged 11.8 points, 3.8 rebounds, 3.5 assists, and 1.9 steals per game. Rivera averaged 17 points per game over the last six games of the season after leading scorer Emily Colon went down with an injury.

Rivera scored a season-high 24 points in a 75–70 win at Penn State Mont Alto on Feb. 9. On three occasions this season, Rivera recorded four steals in a game.  She is a human development and family studies major.

Thomason, a 5'11" senior from New Oxford, Pennsylvania,  (Bermudian Springs High School) scored a season-high 19 points in a 75–70 win at Penn State Mont Alto on Feb. 9, a game in which she also grabbed nine rebounds and blocked three shots.

In her three years playing for Penn State York, Thomason averaged 10.9 points and 8.7 rebounds per game. She is majoring in business.

Buser, is a 6'4" senior from Wrightsville, Pennsylvania, (Eastern York High School). He is majoring in psychology.

In addition to Buser, Colon, and Thomason, all seniors set to graduate in May, Kayla Miller, from Queens, New York, (Hillcrest High School), was honored on Feb. 6 during Senior Night.  Miller is majoring in human development and family studies. 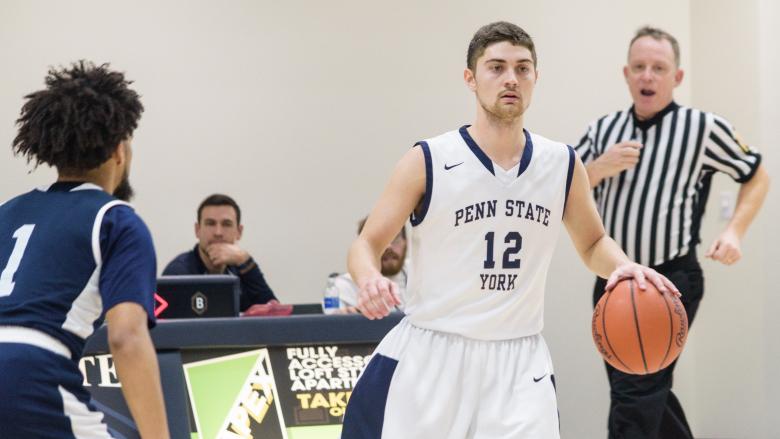