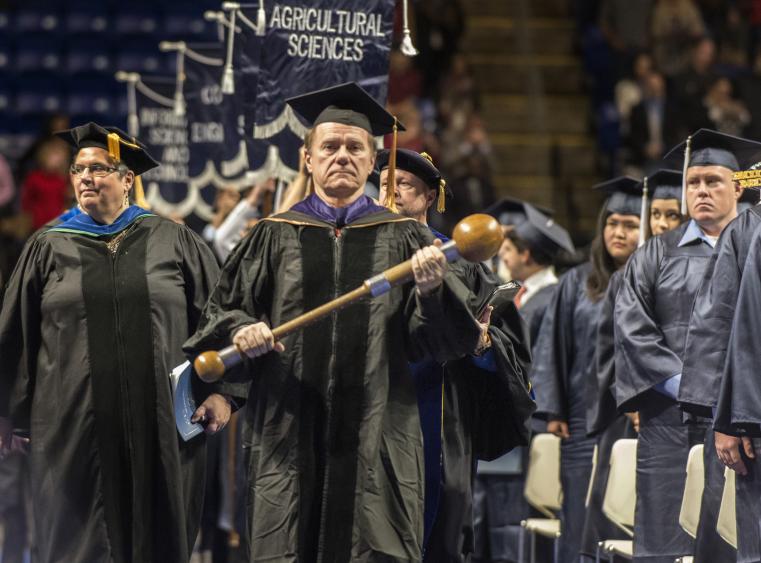 Collins' story parallels the lives of many Penn State Abington students — he grew up in the Philadelphia area, the grandson of immigrants and the son of a high school teacher. He has forged a path as an author, curator and educator at some of the country’s top arts institutions, including as director of the Pérez Art Museum Miami. He earned a bachelor's degree with honors in art history and the history of religion from Swarthmore College and a master's degree in art history from Northwestern University.

Strzelec, the 2016-17 Penn State laureate, earned her bachelor of fine arts in 2000 and master of fine arts in 2002 from the Tyler School of Art, Temple University, in metals/jewelry/CAD-CAM. Her work consists of wearable objects that are created via computer-aided design, three-dimensional modeling, and 3D printing.

Hare has worked in the county for more than 40 years, serving as a probation officer, a law clerk, an assistant public defender, an assistant county solicitor and a deputy district attorney in addition to his current position. He is a member of the state’s bar association, association of court management and the Supreme Court Criminal Procedural Rules Committee. Hare attended the Beaver campus and University Park, where he graduated with honors from the Law Enforcement and Corrections program. He holds a law degree from Duquesne University Law School. He served a two-year term as the president of the Beaver County Bar Association, has participated in the Beaver County Mock Trial Program since its inception in 1988, and serves on the Beaver campus’ Criminal Justice Advisory Board.

Traverso received her bachelor of arts in Spanish literature and linguistics in 1981 from Universidad de Antofagasta, Chile, and the doctorate in Latin American literature in 1996 from the University of Maryland, College Park. Traverso has taught at Penn State Behrend since 1996.

Woycheck, a 1997 alumnus, is operations director at Alloy 26, Pittsburgh’s largest co-working space, which will provide 50,000 square feet of space for more than 300 occupants. He previously worked at Google as an operations manager and was the program manager at the technology accelerator AlphaLab from its inception until 2013.

Tolle was named the DuBois Educational Foundation Educator (DEF) of the Year in 2016. He heads the campus Honors Program, and has taught at Penn State DuBois since 2008.

Breckenridge retired from Penn State in 2014 with 43 years of service to the University. He served as department coordinator for the arts at Penn State Greater Allegheny, as well as coordinator for the four-year Letters, Arts, and Sciences program. He is a founding member of The Heritage Players, a community theater group that performs at the Seton Center in Brookline, Pennsylvania, where he has directed, performed and assumed the role of set designer. He currently serves on the group's board as the technical director. Breckenridge appears in numerous community theater productions in the tri-state area and is a familiar face at various festivals and special community celebrations. He also directed students in original theater productions on the Greater Allegheny campus every semester.

Stengler was first elected president of Hochschule Darmstadt University of Applied Sciences in 2009 and was re-elected in 2015. Hochschule Darmstadt University is in a strategic partnership with Penn State Harrisburg as a result of a funding program from the German Academic Exchange Service to work with their partners in the U.S. Stengler also teaches a course on quality management, and has held positions as dean and vice dean of the Department of Mechanical and Plastics Engineering. From 2001 to 2010, he was academic coordinator for China relations and had a key role in strengthening partnerships with Chinese universities. Since 2013, he has been an honorary professor of Ulyanovsk State Technical University in Russia.

Gilbert, an Oakmont, Pennsylvania native, earned a bachelor’s degree in information sciences and technology from Penn State New Kensington in 2003, and a master’s degree in information science from the University of Pittsburgh in 2005. In his position at Bombardier, he designs, oversees, and implements wired and wireless communications systems deployed in Automatic Train Control Driverless Systems. Headquartered in Quebec, Bombardier manufactures planes and trains, from business jets and commercial aircraft to high-speed trains and public transit. Working with the rail side of the business, Gilbert cultivates relationships with transit authorities and third party consultants for future partnerships.

Sundar is distinguished professor of communications and the founding director of Penn State's Media Effects Research Laboratory. A pioneering researcher on the psychology of communication technology, Sundar conducts experiments on the effects of a variety of digital media, ranging from websites and social media to mobile phones, robotics and internet of things. A frequently cited source on technology, Sundar has testified before Congress as an expert witness and delivered talks at several universities around the world. He is currently editor-in-chief of the Journal of Computer-Mediated Communication, the highest-ranked journal in the field of communication.

Speaker: William S. Shipley III, chairman of the board, Shipley Group, and Penn State Board of Trustees representative

Shipley is the fourth generation of the Shipley family to lead the family business. He began his career as a store manager for 7-Eleven in Delaware, and after two years joined his father's business in 1982 as an administrative assistant. He worked his way up the management ladder and today is chairman of the board of Shipley Group in York, Pennsylvania, and the operator of companies that serve people and businesses in Pennsylvania and the mid-Atlantic region. Shipley Energy is a provider of heating oil, natural gas, propane and electricity, as well as installation and service of heating, ventilation and air conditioning equipment. Shipley earned a bachelor of arts degree in history from Emory University in Atlanta, Georgia, and an MBA from Penn State. He serves as Gov. Tom Wolf's representative on Penn State’s Board of Trustees, and also serves on the board of directors of the Paterno Library. Students at Penn State York benefit from the Shipley Energy Trustee Scholarship.

Cartmell will receive an associate degree in applied science in automotive technology and also be presented with the President’s Award for leadership and service to the college. He serves as executive vice president of the Student Government Association and was SGA Senator of the Year for 2015-16. Cartmell will return in spring 2017 to pursue a bachelor’s degree in automotive technology management.