'Lest we forget,' annual candlelight vigil set for March 30 at Penn State York 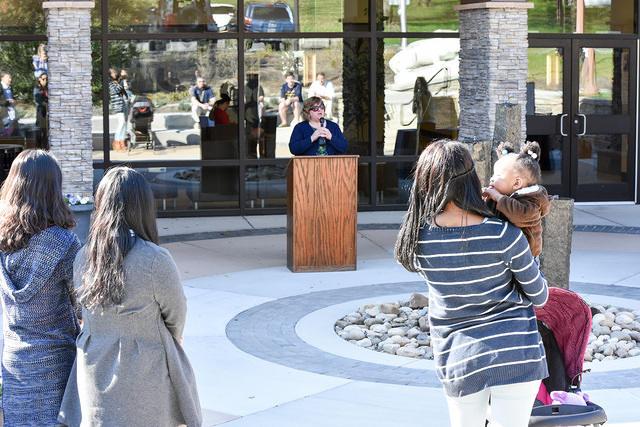 Deb Harrison, director of the York County Children’s Advocacy Center, spoke during the candlelight vigil last year at Penn State York sponsored by the Penn State York Council on Family Relations (PSY-CFR), a student club. The vigil this year is set for 4 p.m. March 30 in the Conference Center on the lower level of the Main Classroom Building. Members of the CFR Club, and other students majoring in human development and family students (HD FS) will speak. The event is free and open to the public.

YORK, Pa. — “Lest we forget.” These are words that continue to hold great meaning for students in the Penn State York Council on Family Relations (PSY-CFR) Club as they prepare for the sixth annual candlelight vigil for child abuse awareness set for Thursday, March 30.

The event will take place at 4 p.m. in the conference center on the lower level of the Main Classroom Building, and is free and open to the public. Following a short program, the group will head outdoors to light candles. The event is happening as part of Coffee Hour, and the Multicultural Club is also sponsoring the vigil.

In the fall of 2011, students in the Human Development and Family Studies Club — now the PSY-CFR Club — made plans to hold an event in November to raise awareness about child abuse and provide information about prevention. Work on this event intensified and a decision was made to make it an annual event, after the 2011 revelations about Jerry Sandusky sexually abusing children were presented. Each year since that time, a vigil has been held.

“I believe the candlelight vigil for childhood sexual abuse awareness is important because no child should have to suffer through this alone,” said Shawnee Hostetter, co-president of the CFR Club and a Penn State York student majoring in human development and family studies (HD FS) at the York campus. “Some people may not be aware of how terrible and often a child could be sexually abused, and it needs to be brought to people's attention. By holding candlelight vigils like these, we not only take a moment for the children who have suffered from sexual abuse, but to also bring more awareness to adults and children as well.”

Stacey Rae, CFR co-president and a student majoring in HD FS said, “The Candlelight Vigil against Childhood Sexual Abuse is an immensely important event that is a core focus of the Counsel on Family Relations Club each and every year. We believe that children are exceptionally vulnerable in the community and should have as much support as possible.

“During the event we light candles, state the pledge to protect children, and hold a moment of silence. This can become a personal moment for those that attend based upon the idea that children are at stake. As the pledge states, 'I believe every child has the right to grow up free from the shadow of abuse.'"

The vigil was moved from fall to spring since Childhood Abuse Awareness month is in April, and features students in the human development and family studies department sharing an important message of hope and healing. The students speaking are representatives from the CFR Club and students enrolled in the Human Service Ethics class, HD FS 301.

Participants in the vigil will be invited to say the following pledge: “I believe that every child has a right to grow up free from the shadow of abuse. I believe that the responsibility to protect children rests solely in adult hands. I believe that, as adults, we must remain ever-vigilant and dedicate no less than the best of ourselves to that purpose. To all the victims of abuse, male and female, adult and children, known and unknown: I pledge to educate myself about the realities of child abuse; I pledge to give a voice and report any and all suspicions; I pledge to cast a light in the darkness by doing the right thing the first time, every time.”

When the vigil ends, participants are invited to return to the conference center and Coffee Hour to create cards of encouragement for hospitalized children.

Coffee Hour is held each week at Penn State York as a way for students, faculty, and staff to meet and discuss a variety of topics, learn something new, and have fun. 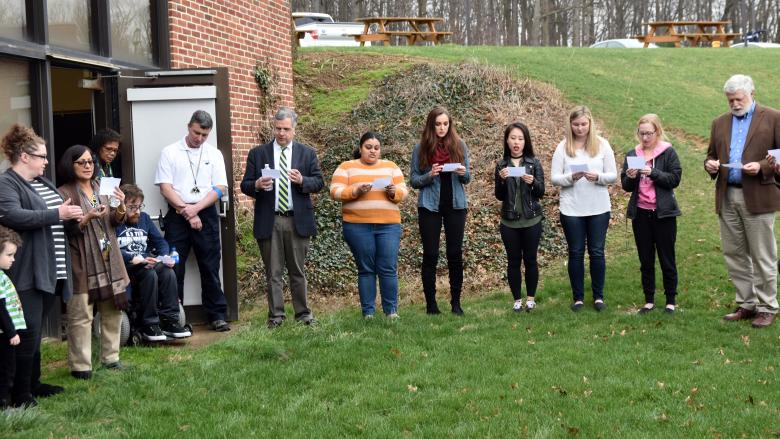