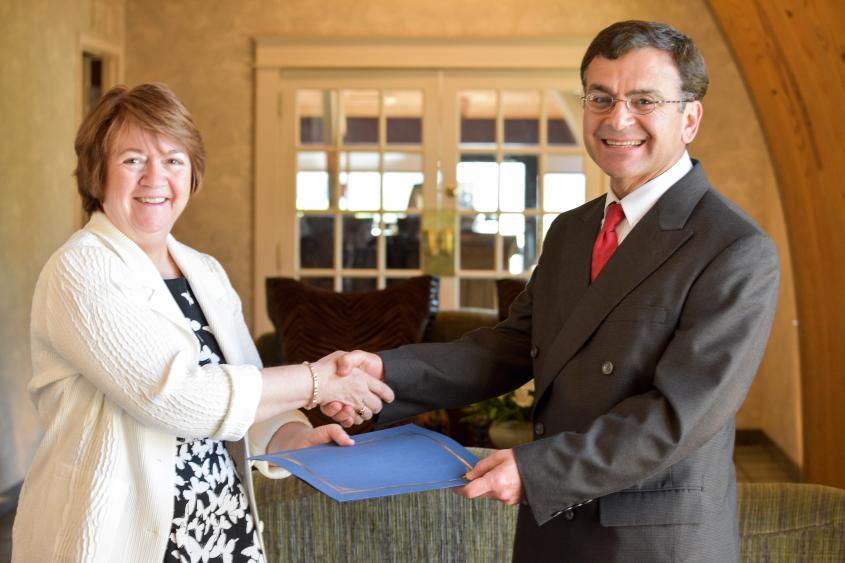 Deborah Eicher-Catt, Penn State York professor of communication arts and sciences and a past teaching award recipient, presents the 2016 James H. Burness Award for Excellence in Teaching to Ali Kara, professor of business administration,  during the 2016 academic awards program. Kara received the full-time faculty award.  Nominations for the 2017 awards are open until Nov. 30.

YORK, Pa. — Nominations are being accepted for the 2017 James H. Burness Award for Excellence in Teaching. The award is given annually to recognize any aspect of excellent instruction — lectures, demonstrations, classroom activities, handling of discussions, individual attention, laboratory instruction, etc. — that contributes to the academic quality of Penn State York. Fall nominations are accepted until Nov. 30.

The purpose of the award is to recognize excellence in instruction, not to identify the most popular faculty member. The teaching award is named in memory of the late James H. Burness in recognition of his outstanding teaching and service to the campus. Burness died in December 1999.

All faculty are eligible to be nominated, except for recipients of the award in the past four years: Anne Vardo Zalik and Christopher Rodkey (2013), Andy Landis and Jorge Santiago-Blay (2014), Deborah Eicher-Catt and Jon Price (2015), and Ali Kara and Walter Arnold (2016).

This nomination form is for faculty who are teaching in fall 2016.  Be as specific as possible with comments about nominees. When the committee receives something non-specific, such as "she's a great professor and definitely deserves the award," it doesn't help much in making a decision.

Nominations should be submitted by 5 p.m. on Wednesday, Nov. 30, using the online form.