Late-night breakfast offers an opportunity for students to relax 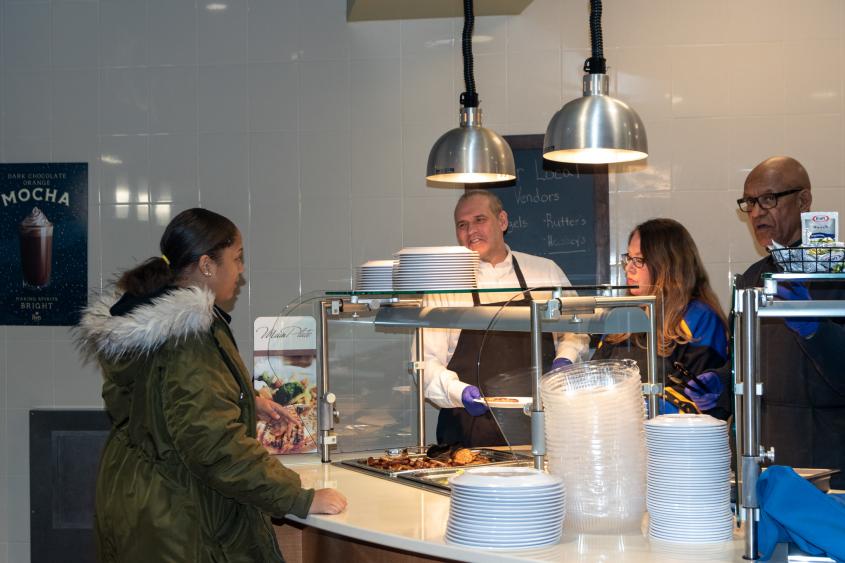 Late-night Breakfast, one of Penn State York's most popular events, is set for 7-9 p.m. Monday, Dec. 16, in Rosie's, located in the Joe and Rosie Ruhl Student Community Center. This free event, featuring faculty and staff serving students breakfast foods, is designed to help students relax as they prepare for finals.

Penn State York’s popular end-of-the-semester event, Late-night Breakfast, is set from 7 to 9 p.m. Monday, Dec. 16, at Rosie’s, in the Joe and Rosie Ruhl Student Community Center on campus. This is a free event and one designed to encourage students to relax.

Penn State York faculty and staff will serve-up a variety of breakfast foods, from bacon and eggs to potatoes, fresh fruit, coffee, donuts and more.

The late-night breakfast is a way for faculty and staff to connect with students and help them relieve stress as they prepare for finals.

In addition to enjoying plenty of food, students can socialize, and be entertained by award-winning mind-reader Mark Toland, who will attempt to tell audience members their birthdays, where they grew up, and what they did last summer. He has appeared on NBC, WGN, FOX, NPR and ABC, and even given his own TED Talk. In addition, he has performed for hundreds of colleges and corporations around the world. His critically acclaimed touring show has also received top awards at international theater festivals, including “Best of Fest” at FRIGID NY and “Pick of Fringe” in Orlando. The Chicago Tribune calls Toland’s act “Mind blowing!” If all of this isn’t enough, those who attend will also have the opportunity to stuff a Penn State pillow.