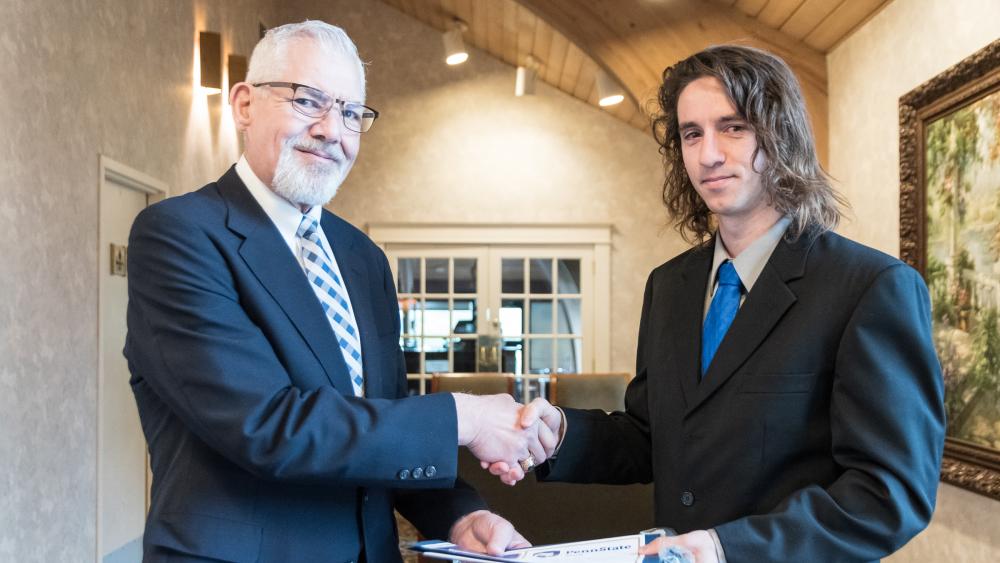 Marshall Coyle, associate professor of engineering, left, presents the Tau Alpha Pi Award to Christopher Verderame, a Penn State York student majoring in electro-mechanical engineering technology, one of the 11 bachelor's degrees that can be completed at the campus. Verderame also was honored with the Clark E. Fisher Memorial Award and a Keystone Honor Society Award during the ceremony.

YORK, Pa. — Penn State York honored the academic achievements and service of its outstanding students, faculty and staff for the 2018-19 academic year during the campus' annual awards ceremony, held Sunday, April 28, at Heritage Hills Golf Resort and Conference Center in York. More than 80 academic and service awards were presented.

Highlights of the program were the presentation of the Eric A. and Josephine S. Walker Award, the James H. Burness Award for Excellence in Teaching, the Penn State York Advising Award, and the Clark E. Fisher Memorial Award.

View photos from the event here.

The Eric A. and Josephine S. Walker Award, the most prestigious student award of the afternoon, was presented to Thalia E. Splawn, of York. This award is given annually to a full-time student who exhibits outstanding qualities of character, scholarship, leadership and citizenship. Each Penn State campus selects a recipient of this award. 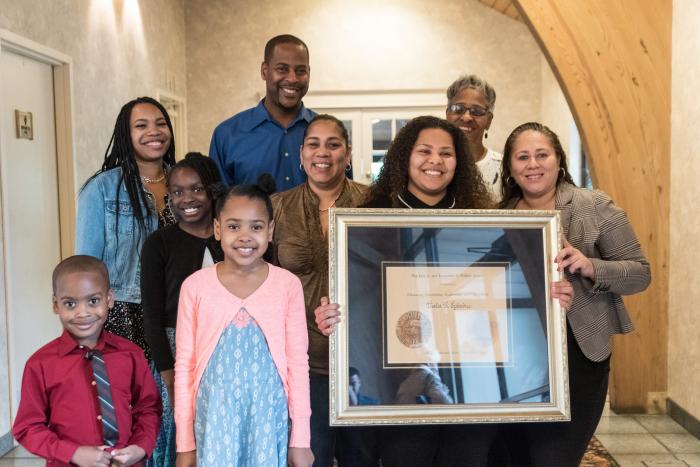 A proud family moment, Thalia E. Splawn, holding the framed award, shares the honor of winning the Eric A. and Josephine S. Walker Award. The Walker Award is the most prestigious award a Penn State student can receive.

Splawn graduated earlier this month at Penn State York with a bachelor of science in human development and family studies. Splawn was recognized for her outstanding work on campus, both in and out of the classroom, to help make the campus a better place. Splawn, who began her journey at the York campus in the Educational Opportunity Program, was successful despite her concerns about being able to balance a large course load, master the schedule, her personal life, and academic work. A leader in her major, this cancer survivor also stepped-up and helped guide Penn State York Benefiting THON as a dancer, co-chair, and active volunteer.

The Clark E. Fisher Memorial Award honors and recognizes outstanding achievement in engineering by a full-time undergraduate student. The award is named for the late Clark E. Fisher, a 1983 Penn State engineering graduate. Fisher’s family members, Precision Custom Components (PCC) — Fisher’s former employer, his colleagues from PCC, and friends joined together to create an award in remembrance of Fisher. The award is given in the field that Fisher loved, engineering. Christopher Verderame, of Mount Wolf, is the recipient.

The James H. Burness Award for Excellence in Teaching is given to one part-time and one full-time member of the Penn State York faculty based on nominations by students and other members of the campus community. The award is named in honor of the late James H. Burness, who died in December 1999, in recognition of his outstanding teaching and service to the campus. This year's recipients are Nicole Muscanell, assistant professor of psychology, full-time award; and Janet McNally, adjunct lecturer in business, part-time award. 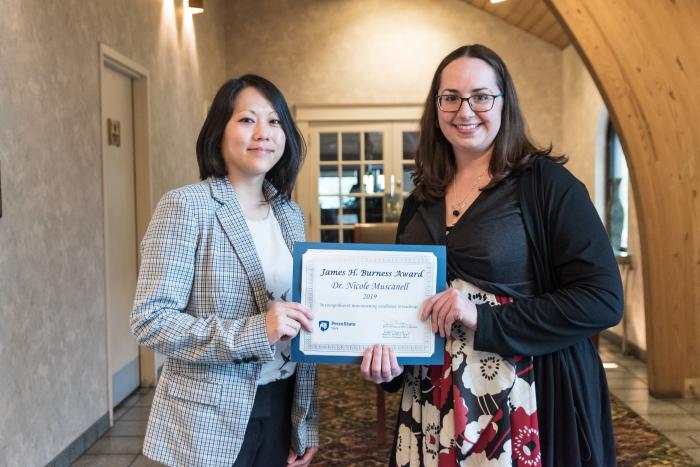 Muscanell, of York, was praised for her approachability and knowledge of her subject. One student said, ”Dr. M. is really engaged with her students, down to earth, and relatable and approachable. She is an A+ professor.” Students also noted her passion for her work, with one student commenting, “She is an excellent professor who is passionate about what she teaches.”  Another said, “You can tell she really loves what she is teaching.” 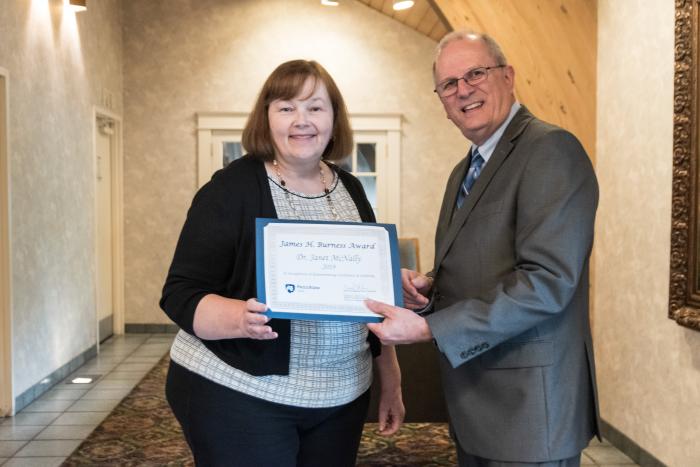 McNally, of Camp Hill, earned praise for being personable, and her students called her a great teacher and business professional. One student who had McNally for several courses said, ”I have had this professor for multiple classes and have enjoyed every one of them. She certainly deserves this award.”

The Faculty Scholarship of Research and Creative Accomplishments award recognizes outstanding achievements in research and/or creative accomplishments within the prior three years in the context of sustained record of scholarship. Sukhdeep Gill, professor of human development and family studies, is the 2018-19 recipient.

Jessica Petko, of Hummelstown, assistant professor of biology, was honored as the winner of the Penn State York Advising Award. Given by the campus Academic Advisory Council, the award was established several years ago to recognize the importance of advising students. This committee operates separately from the teaching award committee.

Students lauded Petko for her support and encouragement. “Even though she is not my adviser or the adviser to many in our class, she took time out of a lecture period to make sure we knew the options available and that we felt confident making course choices,” said one student.  Another student added, “Dr. Petko urged me to do research and other classes required for my major. She has been a great support for the past three years.” A fellow faculty member said, “She has truly taken the phrase ‘advising as teaching’ to heart, and I am so happy today to see her honored for this invaluable work with our students.”

The Academic Achievement Award is given to a student or students in recognition of distinctive academic accomplishments. The award is intended to recognize students who may not have won an award based solely on overall GPA but who may have done a special project or otherwise done outstanding academic work in a particular area. Minimum qualifications include second-year standing by the spring semester of the year in which the award is presented, and a 3.5 or higher cumulative GPA. Huy Le, of York, and Karley L. Richard, of York, are the recipients.

The Academic Achievement in the Biological Sciences Award is presented to students earning a bachelor of science in biology or science and completing their degree at Penn State York. This award is given to a student who is in their final two years of study and has demonstrated excellence in course work, independent studies, and/or extracurricular activities related to their field. The award recipient is chosen by the biology faculty. Gregory Lutz, of York, and Mathura Thileepan, of York, are the recipients.

The Freshman Chemistry Award is presented to a freshman based on outstanding academic achievement in chemistry. Ethan Ritchey, of Stewartstown, is this year’s recipient.

The Evan Pugh Scholar Award is presented to juniors and seniors who are in the upper 0.5 percent of their respective classes and have completed at least 48 graded Penn State credits at the end of the fall semester of the academic year the award is given. Candidates are eligible if they have been full-time undergraduate students for at least four semesters prior to selection. Recipients are Bruno B. Bombarda Mantovani, of State College, and Karley L. Richard, of York.

The President Sparks Award is presented annually to those undergraduate candidates who have earned a 4.0 cumulative grade-point average based on at least 36 graded Penn State credits completed by the end of the fall semester of the academic year the award is given. The President Sparks Award went to Dengyumei Du, York; Huy Le, York; Kai Liang, York; Adannaya Onwukanjo, York; and Lexi A. Schultz, Hellam.

The Dr. Harriet Darling Award – Human Development and Family Studies (HDFS) is presented to an outstanding student who shows commitment to learning and critical thinking, is compassionate, understands issues and opportunities in the lives of children and families, contributes to and advocates for the well-being of others on campus or in the community, and has shown the most improvement through personal growth.  Jessica L. Popp, of Mechanicsburg, is the award recipient.

The Professor Orsay Kucukemiroglu Business Award is presented to a graduating senior majoring in business, and has the highest GPA. Zebulon Krichten, of East Berlin, is the award recipient.

The Outstanding Student-Veteran Award is given to a student demonstrating academic achievement, strength of character, and commitment to service. The award recognizes an extraordinary student who has overcome challenges in reaching this academic milestone, has been involved on campus or in the local community, and has helped make a positive difference for students. Patrick Leeper, of Mount Joy, is again the award recipient.

The Student Government Association (SGA) Campus Service Award is given annually to students whose services have benefited the campus. The award recipient is chosen by the student body. Benjamin Trout, of Windsor, is the winner.

The Student Appreciation Award is given to a faculty or staff person for outstanding service to students.  The award recipient is campus counselor Sarah Bender, of Lancaster.

Gary L. Collison Community Service Awards were presented to Michael Kline, of Glen Rock, and Charissa Strode, of Spring Grove. The service awards are named to honor the late Gary L. Collison, professor of English and American studies at Penn State York, whose idea it was to recognize students for their volunteer service. In addition to community service, recipients must have a minimum 2.5 GPA.

The Unsung Hero Award recognizes a Penn State York faculty or staff member for unselfishly providing outstanding service to the campus and its students, often with limited recognition. Selection is made through student, faculty and staff nominations. Cynthia S. Jones, of York, administrative support assistant in the student affairs office, is the recipient.

The Campus Diversity Award is presented to the student who best reflects the values of diversity and intercultural understanding expressed in the campus statement on diversity. The recipient will have participated in and promoted multicultural activities on the campus and within the University, as well as in the community at large. Wanxuan Xu, of York, is the award recipient. 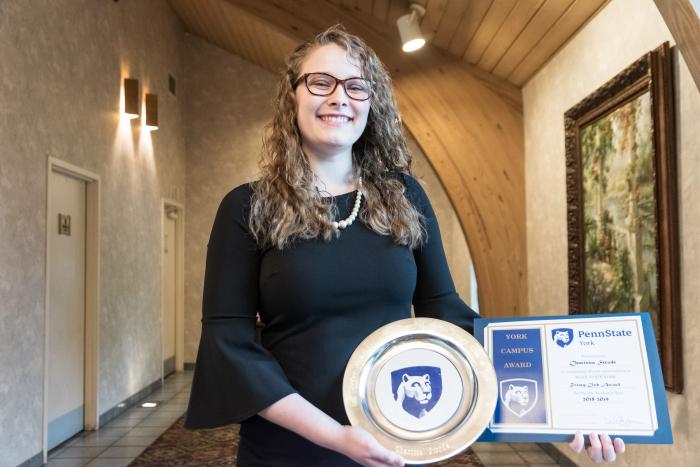 The Rotary Club Award is presented to a student who has completed a minimum of three semesters with a 3.0 GPA and has made significant service contributions to the campus and/or community while a student at Penn State York. Charissa Strode, of Spring Grove, is the recipient.

The Penn State Alumni Association (PSAA) York County Chapter Award is presented to any Penn State York student who possesses outstanding qualities of scholarship, leadership and service to the campus. Students must have a minimum 3.0 GPA and participate actively in the Blue & White Society and/or Lion Ambassadors. Catherine Noble, of York, is the recipient.

The Tutor of the Year Award is presented to the tutor who has made the greatest impact on students who came to the Nittany Success Center for extra help with their course work. Hannah Bartkowski, of York, is the award recipient.

Lambda Pi Eta is the honor society of the National Communication Association that recognizes, fosters and rewards outstanding scholastic achievement while stimulating interest in the communication discipline. All persons considered for membership must exhibit high standards of personal and professional character and support the purposes of the honor society. Recipients of the Lambda Pi Eta Award are Jacob Morgenegg, of York, and Alexander Peters, of Bel Air, Maryland.

The Edward M. Elias Award is presented to the first- and second-year baccalaureate students moving to a campus within the Penn State system with the highest GPA. Kshitiji Bhargava, of York, and Huy Le, of York, are the recipients.