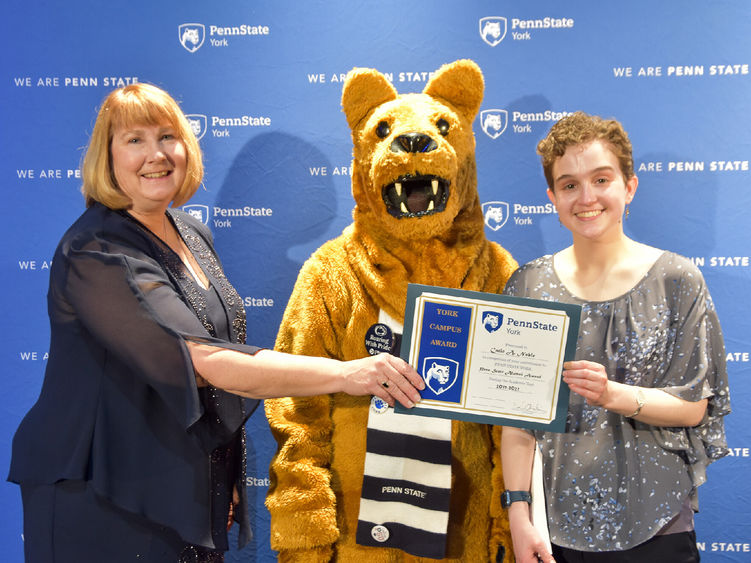 YORK, Pa. — Outstanding Penn State York students, faculty and staff were honored on Sunday, April 24, during the Penn State York Awards Program in the Pullo Family Performing Arts Center on campus. This was the first in-person awards ceremony since 2019 because of the COVID-19 pandemic.

The Eric A. and Josephine S. Walker Award is the most prestigious student award on campus. This award is given annually to a full-time student who exhibits outstanding qualities of character, scholarship, leadership and citizenship. Each Penn State campus selects a recipient of this award. Sweeta Rasiyan, of York, Pennsylvania, is the 2021-22 recipient. Rasiyan is completing her junior year at the York campus and is majoring in psychology with a minor in human development and family studies (HDFS). Rasiyan was recognized for her outstanding leadership and her willingness to help others. She has served as a Lion Ambassador and is a part of the Multicultural Club, the Student Government Association, and the chancellor’s Committee on Diversity, Equity and Inclusion. She also worked as an orientation leader, took part in Capital Day, and is co-chair for the University Programming Board on campus. In addition, she serves the campus by working in the admissions office and as the student affairs marketing specialist by putting together the “Stall Street Journal” and promotional items on the campus television screens.

The Clark E. Fisher Memorial Award honors and recognizes outstanding achievement in engineering by a full-time undergraduate student. The award is named for the late Clark E. Fisher, a 1983 Penn State engineering graduate. Fisher’s family members, Precision Custom Components (PCC) — Fisher’s former employer, colleagues from PCC, and friends joined together to create an award in remembrance of Fisher. The award is given in the field that Fisher loved, engineering. Christian Reed, of Spring Grove, Pennsylvania, is the recipient.

The James H. Burness Award for Excellence in Teaching is given to one part-time and one full-time member of the Penn State York faculty based on nominations by students and other members of the campus community. The award is named in honor of the late James H. Burness, who died in December 1999, in recognition of his outstanding teaching and service to the campus. This year's recipients are Joan Smeltzer, assistant teaching professor in mathematics, York, Pennsylvania, full-time award, and Audra Weaver, adjunct lecturer in communication arts and sciences, York, Pennsylvania, part-time award.

Another student commented, “Professor Smeltzer has gone out of her way many times to make sure that the students that need help are getting what they need. In my math class there are three veteran students, and I can say for all of us we greatly appreciate the extra help and care she provides to make sure we actually are learning the information to build up for Math 21, not enough to just pass the class. Best professor I have had so far!”

Smeltzer is the adviser for the Rainbow Paws Club on campus.

Weaver was praised for being very understanding, kind and caring. Her willingness to do Zoom calls to practice speeches also was noted. One student said, “She genuinely cares about us, as students, and makes sure we understand every aspect of every assignment.” Another student said, “She is engaging, and uses thorough analogies to explain concepts.”

In addition, a student noted, “She is one of the best professors/teachers I have ever had, I am proud to vote for her. She has been personable in class and helps me be a better student in every class.” 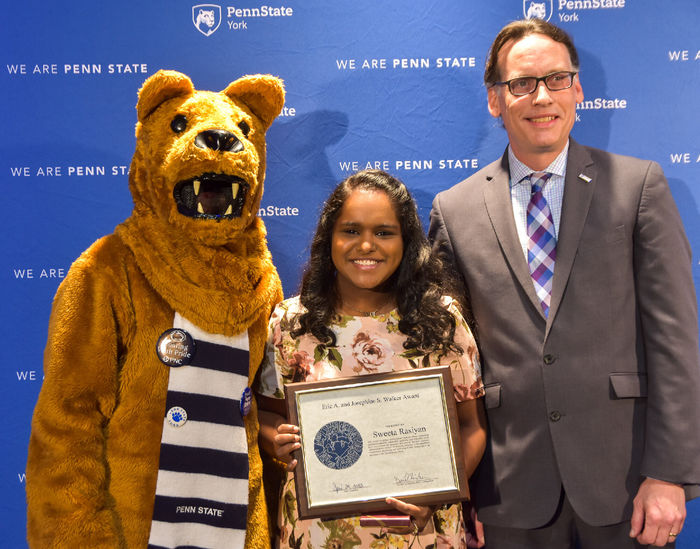 Foster joined the York campus in the fall 2020 semester and jumped right into his position with enthusiasm and commitment to student success, despite the unusual circumstances of the pandemic. According to one student, “I am nominating this adviser due to the time, energy, and help I have been given. His efforts in providing the best solution and plan helped me very much. He truly cares about his students.”

Another student said, Dr. Foster is also free to talk and listen about basically anything if it is school related, life related, anything really. He was very very helpful in picking classes and degree planning and only wants what is best for his students. Overall, an amazing professor and adviser.”

The Faculty Scholarship of Research and Creative Accomplishments Award recognizes outstanding achievements in research and/or creative accomplishments within the prior three years in the context of sustained record of scholarship. Jennifer Nesbitt, associate professor of English, is the 2021-22 recipient.

The committee, as in the past, shared that they faced a difficult decision again this year given the outstanding portfolios provided by nominees. The committee shared, “Dr. Nesbitt is a perfect example of excellence as a teacher-scholar exhibited by so many of our faculty at Penn State York. Her second book, 'Rum Histories: Drinking in Atlantic Literature and Culture' (University of Virginia Press), is the first work of scholarship on this subject and her successful completion of the manuscript during the COVID pandemic is a testament to her dedication to this work. She has also more recently taken on the role of editor to the online journal, The Space Between: Literature and Culture, 1914-1945.”

The Academic Achievement Award is given to a student or students in recognition of distinctive academic accomplishments. The award is intended to recognize students who may not have won an award based solely on overall grade-point average but who may have done a special project or otherwise done outstanding academic work in a particular area. Minimum qualifications include second-year standing by the spring semester of the year in which the award is presented, and a 3.5 or higher cumulative GPA. Sarah C. Hughes, ofDover, Pennsylvania, is the recipient.

The Academic Achievement in the Biological Sciences Award is presented to students earning a bachelor of science in biology or science and completing their degree at Penn State York. Students must be in their final two years of study and have demonstrated excellence in course work, independent studies, and/or extracurricular activities related to their field. The award recipient is chosen by the biology faculty. Nicholas Nase, of Dillsburg, Pennsylvania, and Kelsey Ruhlman, of Spring Grove, Pennsylvania, are the recipients.

The Freshman Chemistry Award is presented to a freshman based on outstanding academic achievement in chemistry. Braden Reese De Leon, of York, Pennsylvania, is this year’s recipient.

The Evan Pugh Scholar Award is presented to juniors and seniors who are in the upper 0.5% of their respective classes and have completed at least 48 graded Penn State credits at the end of the fall semester of the academic year the award is given. Candidates are eligible if they have been full-time undergraduate students for at least four semesters prior to selection. Recipients are Logan Z. Coomes, Stewartstown, Pennsylvania; Brynn D. MacDonald, York, Pennsylvania; Hunter Haggett, York, Pennsylvania; and Josh D. Wagner, Red Lion, Pennsylvania.

The President Walker Award is presented to undergraduate students who have earned a 4.00 (A) cumulative grade-point average based on at lease 12 Penn State credits completed during their first semester of admission. Candidates are eligible for this award if they have fewer than 36 Penn State credits earned. During the presidency of Eric A. Walker (1956-70), and with the approval of the Board of Trustees, the number of awards was increased and in 1960, the President’s Freshman Award, as this award was formerly known, was established to recognize high-achieving first-year students.

The President Sparks Award is presented annually to those undergraduate candidates who have earned a 4.0 (A) cumulative grade-point average based on at least 36 graded Penn State credits completed by the end of the fall semester of the academic year the award is given. The President Sparks Award recipients are Victoria Huynh, York, Pennsylvania, and Justin Lin, Lancaster, Pennsylvania. 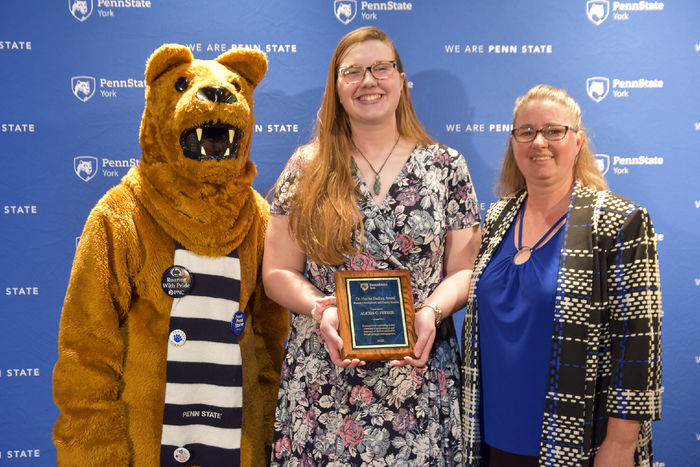 The Dr. Harriet Darling Award – Human Development and Family Studies (HDFS) is presented to an outstanding student who shows commitment to learning and critical thinking, is compassionate, understands issues and opportunities in the lives of children and families, contributes to and advocates for the well-being of others on campus or in the community, and has shown the most improvement through personal growth. Alexis C. Feeser, of York, Pennsylvania, is the award recipient.

The Professor Orsay Kucukemiroglu Business Award is presented to graduating seniors majoring in business who have the highest GPAs in their major. Cole J. Wentz, of Dover, Pennsylvania, is the award recipient.

The Tutor of the Year Award is presented to the tutor who has made the greatest impact on students who came to the Nittany Success Center for extra help with their course work. Btittany M. Stump, of York, Pennsylvania, is the winner.

The Outstanding Student-Veteran Award is given to a student-veteran demonstrating academic achievement, strength of character, and commitment to service. The award recognizes an extraordinary student-veteran who has overcome challenges in reaching this academic milestone, has been involved on campus or in the local community, and has helped make a positive difference for students. Jared M. Posedenti, of York, Pennsylvania, is the recipient.

The Student Government Association (SGA) Campus Service Award is given annually to students whose services have benefited the campus. The award recipient is chosen by the student body. Tyler Muessig, of Vineland, New Jersey, is the winner.

The Student Appreciation Award is given to a faculty or staff person for outstanding service to students. The award recipient is Joy Giguere, associate professor of history at Penn State York, of Dallastown, Pennsylvania.

Gary L. Collison Community Service Award winners are Sweeta Rasiyan, of York, Pennsylvania, and Rafeu Syed, of York, Pennsylvania. The service awards are named to honor the late Gary L. Collison, professor of English and American studies at Penn State York, whose idea it was to recognize students for their volunteer service. In addition to community service, recipients must have a minimum of a 2.5 GPA.

The Rotary Club Award is presented to a student who has completed a minimum of three semesters with a 3.0 GPA and has made significant service contributions to the campus and/or community while a student at Penn State York. Madison L. Forbes, of Spring Grove, Pennsylvania, is the recipient.

Penn State Alumni Association (PSAA) York County Chapter Award is presented to any Penn State York student who possesses outstanding qualities of scholarship, leadership and service to the campus. Students must have a minimum 3.0 GPA and participate actively in the Blue & White Society and/or Lion Ambassadors. Catie A. Noble, of York, Pennsylvania, is the recipient. 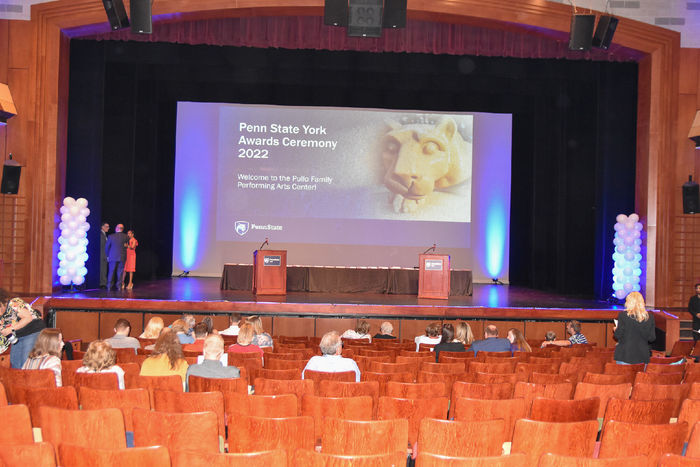 The Penn State York Awards Program took place in the Pullo Family Performing Arts center on campus. This was the first in-person awards ceremony since 2019 due to the COVID-19 pandemic. 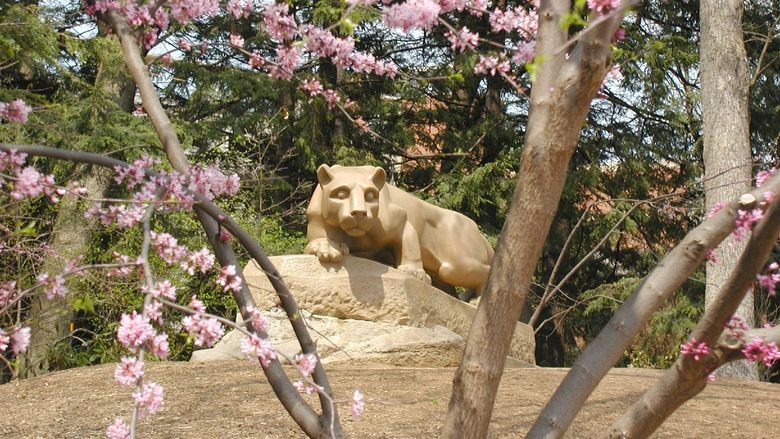 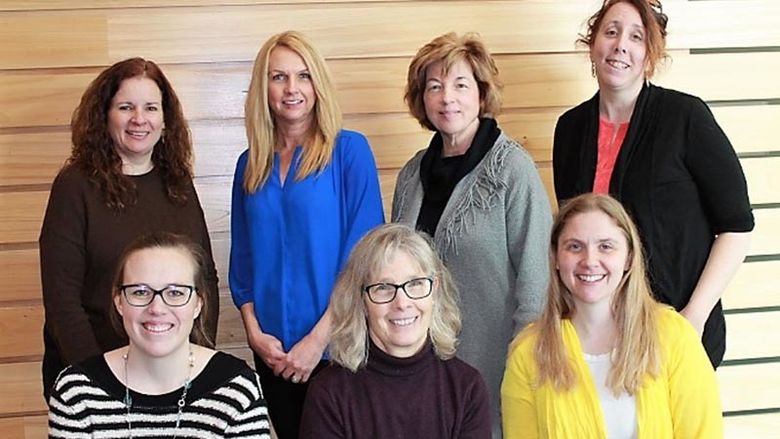 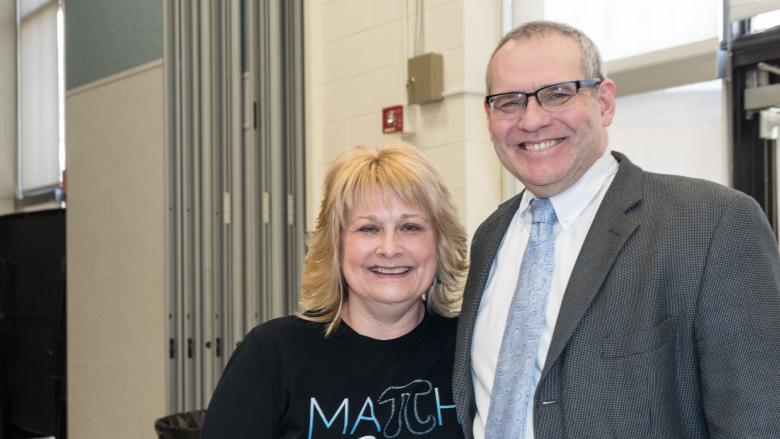